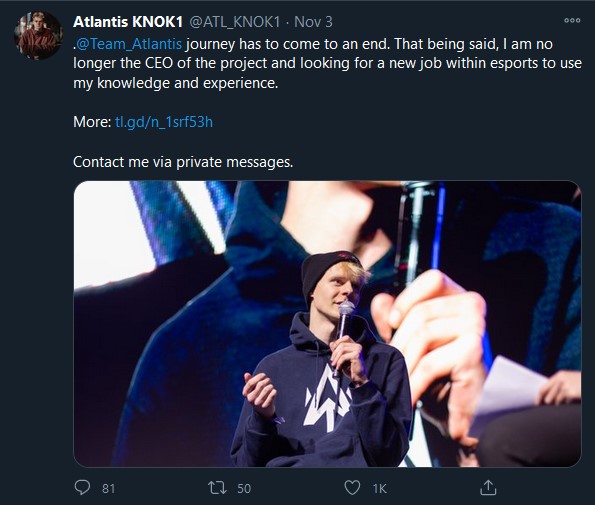 Team Atlantis, one of the smaller competitive Fortnite teams out there, is unfortunately getting disbanded following this rollercoaster of a year.

The number of tournaments and other Fortnite Esports events that it planned to participate in but was prevented after they were canceled, rescheduled, or indefinitely delayed as part of the government-mandated shutdowns acrosss the world proved to be too great for Team Atlantis to keep the lights on amid all this uncertainty.

The head of the team, KNOK1, published a video detailing the decision in which he confirmed as much, but also said the current competitive landscape around the game is simply too “inflated” to bear the costs of such uncertainty. A skeptical interpretation of his video would be to claim that’s just an attempt to shift blame while explaining what’s essentially mismanagement.

However, given how young the Fortnite Esports scene still is, it is probably not reasonable to expect every new team plans for such prolonged periods of hybernation.

KNOK1 did also provide a glimmer of hope by saying there is a chance Team Atlantis gets rebooted in the future but as things stand right now, the team simply wasn’t accomplished enough to sustain itself for much longer without new events and sponsorship opportunities.