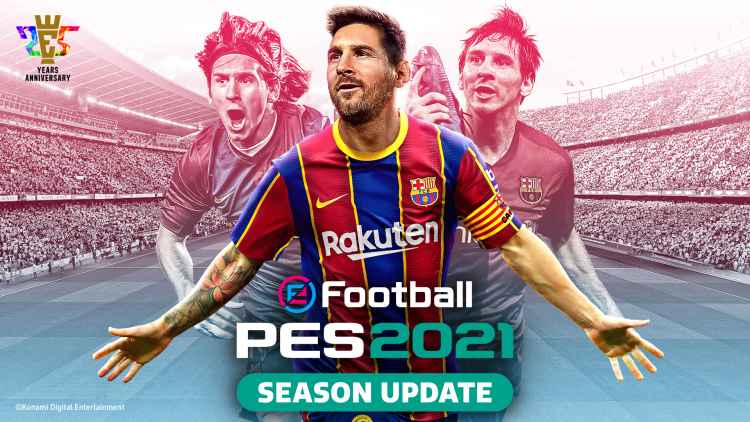 Pro Evolution Soccer 2021 won’t be a standalone game but an update to eFootball PES 2020, Konami announced. The Japanese studio said the decision was made so that the development team can focus on making PES 2022 a truly next-gen football simulation experience.

Though cynics may inquire about this mysterious concept of PC generations in response to the news, it’s hardly a secret that both PES and FIFA, the only mainstream contenders in the space, generate the majority of their sales on consoles. More specifically, PlayStation and Xbox consoles, both of which are due for a generational upgrade this holiday season.

Awkward time for a 25th anniversary

Konami’s DLC-sized release, officially called eFootball PES 2021 Season Update, is due to arrive on September 15th. Due to the seasonal delays caused by COVID-19, some player and club data will be added on launch day. An offline tournament mode including all 55 UEFA national teams will be available from day one, as well, even though the actual EURO 2020 tournament has been postponed until next year.

Coincidentally, this happens to be the 25th anniversary of the long-running franchise, and Konami is also working on some club editions of the game, so expect pricing to be all over the place. The only thing that’s certain is that the cheapest way to buy the game will be through eFootball PES 2020 as doing so will yield a flat 20% discount. Of course, you won’t have to own the previous installment just to buy its modest sequel.

The PC version of PES 2021 will be distributed as a digital Steam exclusive.

2020 Archive Notification: Hey there dear reader, you’re currently going through an archived news. It’s an outdated piece, probably not highly relevant in 2021. If you want the newest stuff, we would highly recommend either our homepage, the gaming news category, the tech news one or, if you’re in to esports, the esports news category. As of late we’re also creating content around privacy, so if you’re into that kind of stuff you can find it under our networks category.